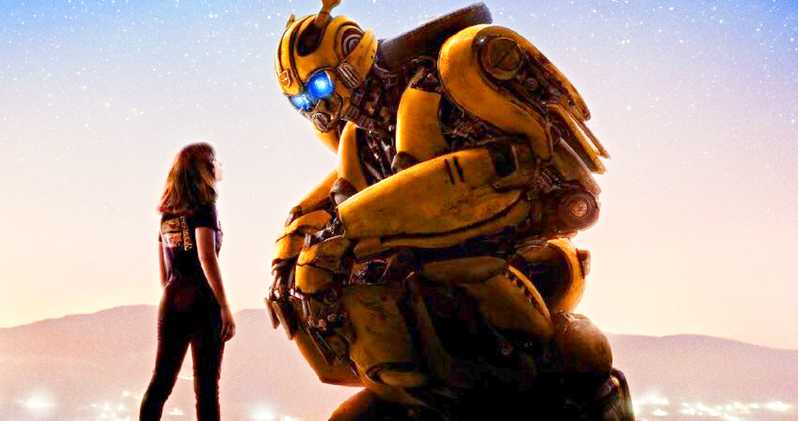 However, in December 2018, just
over a year after ‘The Last Knight’ had been released, the flow of
progressively worse productions in the Transformers franchise was finally given
the chance to come to a halt with the release of a promising little spinoff
that could, named ‘Bumblebee’. With Travis Knight of ‘Kubo and the Two Strings’
fame at the helm, this was the potential chance the franchise needed to at last
fish itself out of the deep mire of obnoxious bombast it had wallowed in over
the past 11 years. How does it hold up?

I’m glad to say that the film holds
up very competently compared to its predecessors. It’s not by any means a
masterful or profoundly original piece of cinema, but it’s still a delightfully
exciting, hilarious and heartfelt ride all the way through, which is more than
I can say for any of the Bay films since ‘Revenge of the Fallen’ (2009). While
it’s still intrinsically tied to the narrative of the Bay films as a soft
reboot, it appears to have deviated substantially from most of the standard
vices that came part and parcel with them, such as a glaring lack of ethnically
insensitive caricatures, more restrained and less drawn-out action scenes,
along with the fact that the film treats the robots like characters as opposed
to exploding CG abominations.

As an origin story for our titular yellow-painted
robotic protagonist, the film kicks off immediately with an electrifying and
wonderfully animated prologue depicting the fall of Cybertron where Bumblebee
and his fellow Autobot rebels are fleeing their home from the Decepticons. This
is both a marvellous showcase of Travis Knight’s animation talents, no doubt
garnered from his experience at Studio Laika as well as a sign of deep-seated
affection for the nostalgia of the 1984 Transformers cartoon, which goes part
and parcel with the film’s 1980s setting and aesthetic. The exiled Bumblebee
makes his way to earth where he crash lands in the middle of a U.S. military training
exercise lead by Agent Burns, played by the ever macho John Cena. He
immediately treats the robot as a hostile invader and orders an attack, but
before Bumblebee can reason with him, he is ambushed by a Decepticon who viciously
tears out his voice-box and damages his memory core and leaves him to fall
unconscious. A moment that finally establishes the reason why the character
couldn’t speak in previous films. We’re then introduced to our human
protagonist, Charlie, played by Hailee Steinfeld, a teenage misfit who has
difficulty coming to terms with the death of her father and is deeply resentful
of her mother for re-marrying. She encounters Bumblebee in the form of a yellow
Volkswagen Beetle in a scrapyard and the owner gifts it to her as a birthday
present. From here on in, the bond that both human and machine share becomes
the driving force and soul of the movie, giving it a sense of humanity and
heart that the previous films were sorely lacking.

The relationship between both
Bumblebee and Charlie is both a heartfelt and believable one that deliberately
pays homage to the classic 80s Spielberg formula of the unlikely friendship
between human child and alien creature depicted in films like E.T. and The Iron
Giant (the fact that the film was produced by Steven Spielberg himself only
further reinforces this). Both the human child, Charlie, having been emotionally
crushed from the death of her father and estranged from her family, and the
alien creature, Bumblebee, who had been left to wonder an unfamiliar world like
a confused and frightened child, encounter one another during a desperate
period of their lives when they unknowingly need each other most. Charlie needs
Bumblebee as someone who can fill the void that her deceased father had left
behind and one that her family does little to provide, and Bumblebee needs
Charlie to show him empathy and humanity in a cruel and unknown world that
treats him as an invader. Their relationship is made even more compelling to
audience no thanks to Hailee Steinfeld’s fantastic leading performance as
Charlie.

One problem I had with the film was
that most of the other secondary characters come across as two-dimensional and underdeveloped
but nonetheless serviceable. Agent Burns, for instance, representing the
typical ominous governmental authority figure is not an especially
well-developed human antagonist, but John Cena’s performance gives the
character enough charisma to at least be somewhat memorable. However, it’s hard
to say the same for the other side characters who are equally two-dimensional
and uninteresting, but unlike Cena’s memorable performance as Burns, the side characters provide
very little to make them seem distinctive or endearing. Another, arguably more
trivial issue I had with the film was the simple fact that as a soft reboot,
it’s narrative still appears to remain tied to its comparatively soulless, noisy
and uninspired predecessors. But this is a minor gripe that does little to
stifle my optimism for the future of this franchise due in no small part to
this film’s marked improvement.

‘Bumblebee’ is a sign of a slow and
steady recovery for a franchise that had suffered over 11 years of poor cinema
outings. It’s a film that’s undeniably built upon the template Michael Bay had
established in his previous Transformers films, and it benefits surprisingly
well from making use of that template. The robots themselves, for instance,
while given an updated design reminiscent of their early 1980s appearance still
take their general aesthetic largely from what Bay had established. That being
said, it serves as a reminder that despite this franchise’s shortcomings, a
film about an intergalactic war between factions of transforming giant robots
still has the potential to tell a more nuanced, nostalgic and touching story.