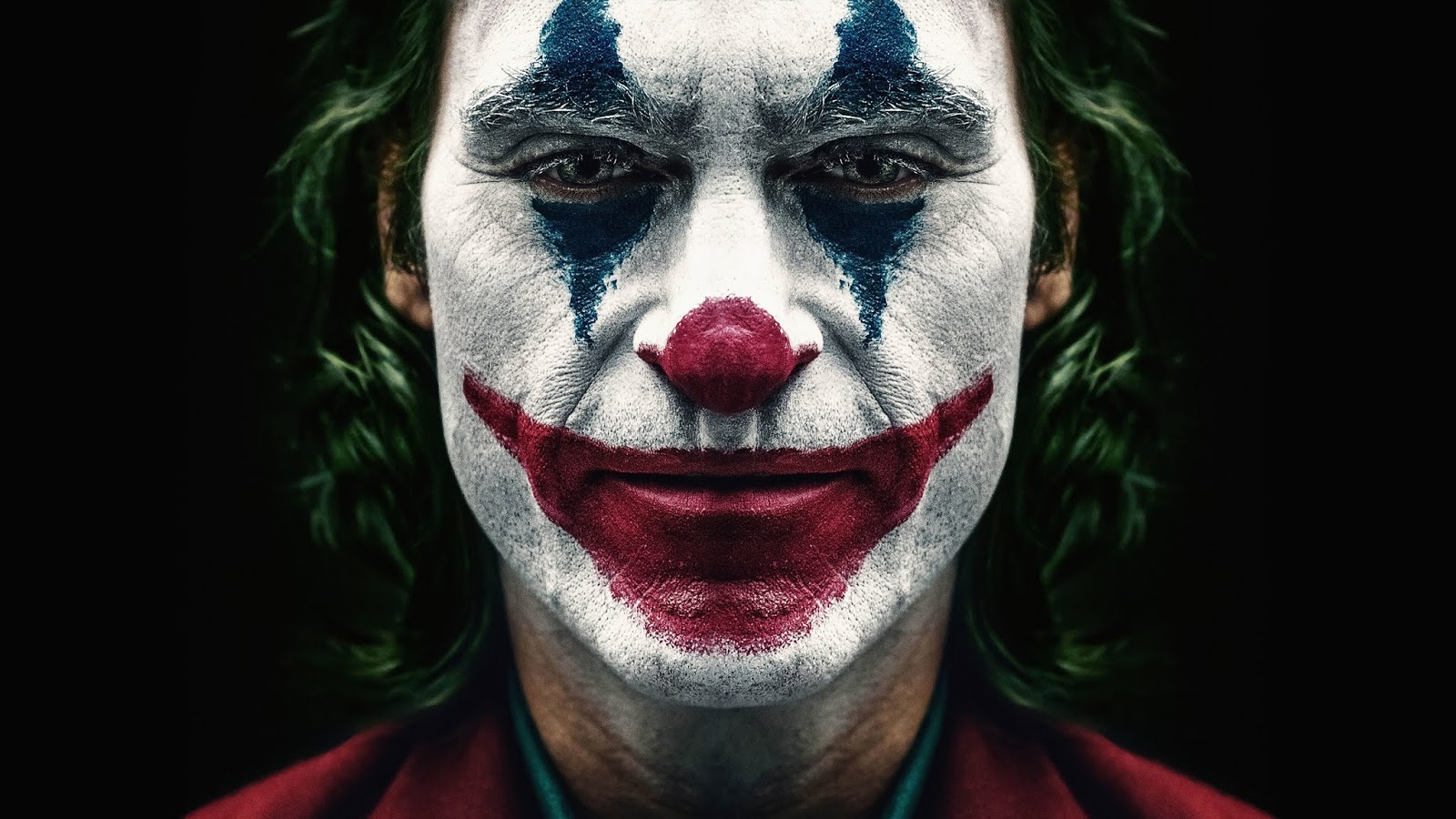 Over the years, the Joker as a character has garnered a notorious reputation as a ‘cursed’ role among accomplished Hollywood actors. From Cesar Romero’s notorious white Joker-mustache permanently haunting his acting career to Heath Ledger’s bizarre psychological rituals chronicled in his ‘Joker journal’. Every actor who had performed the Joker had each shaped the character in a unique and imaginative perspective, and with Joaquin Phoenix donning the clown makeup, a more modern and visionary take on the character had been brought to life.

Directed by Todd Philips of ‘Hangover’ fame, ‘Joker’ (2019), while having its origins firmly rooted in DC-Comics’ Superhero mega-franchise Batman, stands as a prominent outlier among the eternally expanding plethora of Comic-Book-inspired productions. In that, it makes an audacious gamble to annihilate any pretenses of heroism or grand dramatic spectacle ever-present in every Superhero production to this day, in favor of a pessimistic, dreary yet morbidly poignant psychological exploration of the Joker and the horrendously cynical and uncaring world that birthed him. The film pulls no stops in conveying in raw detail, the wretched existence and downfall of a mentally ill outcast and the unrelenting cruelty of a society that’s seemingly set out to destroy every shred of happiness and comfort he desperately attempts to salvage.

This aforementioned outcast is a perpetually miserable and downtrodden man named Arthur Fleck. The man who, through a downward spiral of disastrous events would be doomed to transform into the titular Joker himself. A mentally ill party clown and failed stand-up comedian, Fleck suffers from a compulsive disorder that causes him to laugh at inappropriate moments. A condition that frequently earns him the ridicule of Gotham’s uncaring public. This is only made worse by his awkwardness at delivering jokes as a comedian and his frequent blunders as a party clown, such as a gun falling out of his pocket while he was entertaining a children’s hospital. The circumstances of Fleck’s horribly abusive upbringing coupled with the mockery and derision he had received from his former hero along with society’s total abandonment of him would complete his psychological metamorphosis into the nihilistic criminal known as The Joker.

Arthur Fleck is by far, the most tragic and true-to-life incarnation of the Clown Prince to this day, partially due to this iteration of the character being depicted as an allegorical deconstruction of the devastating circumstances of how the Joker came to be. A mentally ill man trying his hardest to find a semblance of joy and positivity in a callous world that offers next to none. Throughout most of the first act, Arthur is punished and persecuted harshly for minor missteps. His boss and his therapist show next to no empathy towards him, with his boss reprimanding him over losing a sign, dismissing his assault as a ‘bunch of bullshit’, and his therapist choosing to criticize him rather than properly understand his issues. The world constantly expects this mentally ill man to “behave as if he doesn’t” and bullies him at every turn for his condition. But when he finally snaps and guns down those young men on the train, Arthur, ironically, gets away with committing this first act of malice scot-free. Following this action, he gains a semblance of newfound self-confidence and begins to let go of his inhibitions, as though it was the first action that enabled him to affirm his existence.

Joaquin Phoenix’s depiction of the Joker is a pitch-perfect portrayal of the evil clown archetype. He embodies the playful, bouncy physicality of the clown-prince, expressed through energetic dancing and jocular bombast, as seen when entertaining children at a hospital and following his transformation into the Joker as he danced on the staircase. True to the Joker’s character, he also frequently smiles and laughs maniacally at the mayhem he commits towards the end of the film, relishing childishly in the carnage and mayhem committed in his name. However, in the first act, this playful, clownish physicality combined with his impulsive bouts of manic laughter belies a profound sense of utter despair and anguish emanating from his psyche. A sense of despair given form by, more than anything, a complete lack of self-perception painfully reflected through his diary entry; “I just hope my death makes more sense than my life.”

In much of the first act, Arthur Fleck lives every day of his life in an aimless, existential nightmare where every aspect of it, from his rude co-workers to his unsympathetic therapist, and his emotionally abusive mother causes him to call his own reason for living into question. A pervasive sense of nihilistic dread that is reflected visually through Arthur staring despondently out through a bus window and walking up the city steps downtrodden and miserable. He had no purpose for living and had developed no true connection with the world around him. It’s only when his first crime is recognized by the media as a ‘clown killer’ of sorts is when he finally develops some form of persona to attach a meaning to his existence. His murder was the first ever mark he had made upon the world, and the more recognition he would garner for this crime, such as the clown protesters, the further he would cultivate this persona into what would become the ‘Joker’. Evidently, this ‘Joker’ persona would end up becoming all that he has left, as any semblance of who he once was as ‘Arthur Fleck’ would vanish into total non-existence after he had discovered that he had been adopted and abused by his ‘mother’ and had suffered from memory loss as a result of that abuse. He ultimately discards his false life as Arthur Fleck when he murders his ‘mother’, realizing that it was all nothing more than a sick, cruel joke. 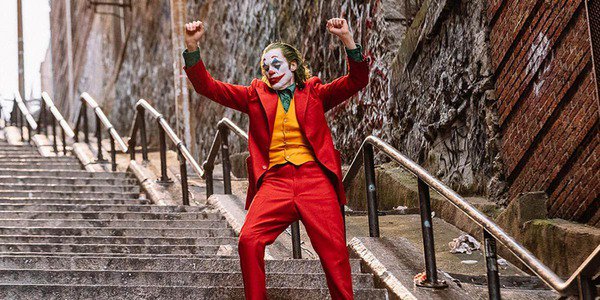 The Joker’s interview with Murray makes up the final act of the movie and makes for a chilling, yet exhilarating climax. Having nothing left to lose and nothing left to hurt him, the Joker makes a bombastic and outrageous entrance in his iconic clown makeup and suit, begins his performance with a macabre and blatantly offensive joke; “your son’s been hit by a drunk driver, he’s dead”, followed by admitting to his murder of Wayne’s young employees on the train. He even goes as far as to shamelessly admit that he found killing them to be funny and that he is “tired of pretending that it’s not”. The Joker then goes on a bitter, misanthropic diatribe towards the uncaring apathy of society and the awful people that have disregarded his very existence and would “walk all over him if it was him dying on the sidewalk”, all the while gleefully mocking the young men he had gunned down. To cap it all off in a single gruesome display, the Joker shoots Murray in the head on live TV. His own sickening way of giving this awful society “what it fucking deserves”, all the while giggling and trembling in crazed satisfaction in what he had just done. 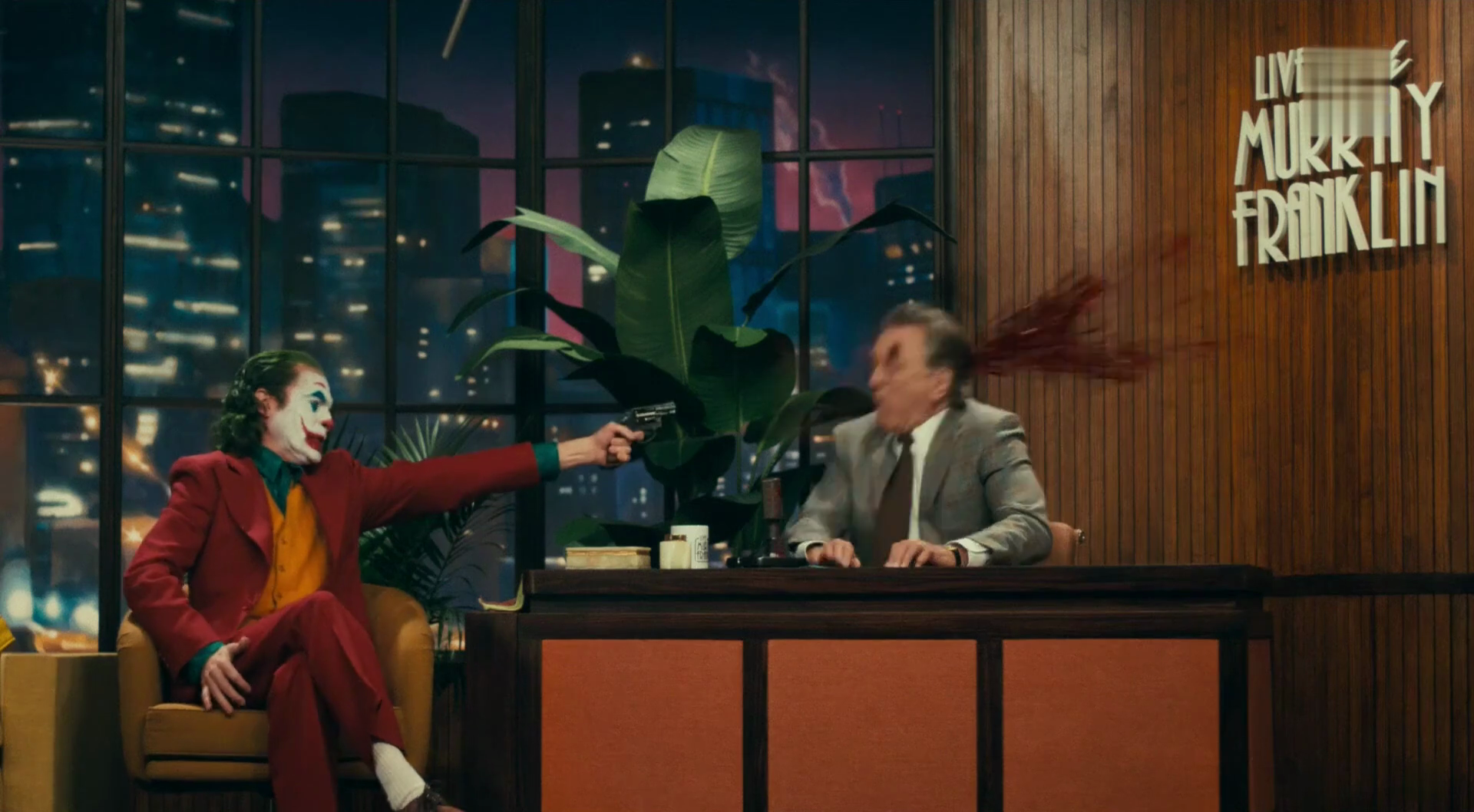 The rest of the film consists of the Joker taking sadistic delight in the utter mayhem he had caused from the view of a police-car window, an ironic echo of him staring miserably out of a bus window earlier. Hellish riots erupt on the streets of Gotham between the police and clown-mask donning revolutionaries, accompanied by many civilian casualties, including the deaths of Thomas and Martha Wayne, hinting at Batman’s possible appearance in a potential sequel. This grisly finale is concluded with the Joker performing one last dance along with a final bloody smile before the applause of an adoring crowd of masked rioters. Where he was once disconnected and isolated from the world around him in his sanity, he finally discovers his first true connection with the world as his descent into madness is complete.

‘Joker’ is neither an easy nor comfortable film to watch. It is a grim, pessimistic and enthrallingly slow-burning tale of psychological self-annihilation that only spirals progressively downward into the deepest fathoms of depravity and hopelessness. In that regard, it stands as a bold outlier among it’s more optimistic and fantastical superhero-based contemporaries due to the film’s lack of adherence to the tired tropes and clichés typical to the genre. This time, there is no dark, caped savior watching over Gotham city atop its imposing towers to counterbalance the clownish lunacy of the Joker. Rather, the cruelty and apathy of a more sordid and lifelike Gotham intertwine with the miserable existence of a downtrodden outcast, twisting and warping him into the Clown Prince himself. The bitter irony is that his disconnect with reality was so painfully severe throughout the film, that it took a dark metamorphosis into a murderous psychopath for him to find any semblance of meaning in his pitiful life.